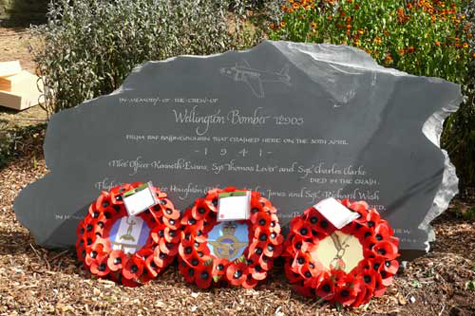 On the 30th of April 1941, a Wellington Bomber crashed in our park. after an amazing amount of research by John Clark, FoSAP raised £4,000 and on 26th September 2009 a memorial stone was erected in St Andrews Park and a dedication ceremony took place to unveil it. Many relatives of the crew and of those involved in rescue attempts and many local people were present.

The plane was on a training flight, and while flying, struck a cable of a barrage balloon over Purdown which became wrapped around the plane’s wing.  The plane continued flying in the direction of the park and hit one of the tall trees in St Andrews Park, slicing off its tail, and then crashed into the ground, breaking into two on impact and bursting into flames.  The bombs and ammunition that the plane was carrying started to explode following the initial impact.

Some local people ran to the crashed plane, bravely facing the fire and exploding incendiary, and rescued the three crew members who were still alive.  The rescuers included a local young police officer who actually entered the plane to do this.

Three crew members were killed in the crash: